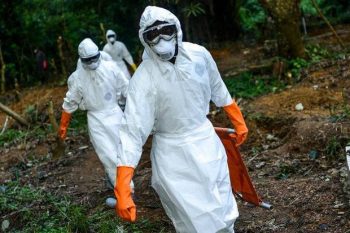 Even with our modern medical knowledge, deadly diseases continue to kill many people across the world. Sometimes diseases are a result of sin against God. God has the power to cure deadly diseases that doctors are not able to cure.

In 2018, it appears that there is an epidemic outbreak of the deadly disease called “eye bleeding fever.” The medical name for this disease is Crimean-Congo Hemorrhagic Fever or CCHF. The victims suffer from a burning fever followed by bleeding from the eyes and other parts of the body. According to the World Health Organization, this disease can also cause headaches, muscle aches, nausea and vomiting. The heart rate may be fast, lymph nodes enlarge and a rash caused by bleeding into the skin.

Cases of the “eye bleeding fever” have been identified in Africa, the Balkans, the Middle East and some Asian countries. The World Health Organization says that this deadly disease has a death rate of 10 to 40 percent. Scientists and doctors have not been able to come up with a sure cure for this deadly disease.

Diseases such as Chloera, Yellow Fever, Zika Virus, Ebola, Malaria, H1N1 flu virus, and the Black Plague have killed millions of people. Doctors are still limited in their knowledge about the potential cures for disease. They really cannot cure anyone. When it comes down to it, the Great Physician, God, is the only One who can cure disease. Doctors can only prescribe medicine that may help heal disease.

Disease a Result of Sin Sometimes

Sometimes disease is a direct or indirect result of sin against God. Rebellious people in Israel were sometimes punished with disease because of their sins. Jehoram, the king of Judah, was struck with a deadly disease because of his sins. The people under his rule also suffered from a great plague. Even the children faced the deadly results of a plague.

As much as we hate to see a child die by a disease, it may save their eternal soul. If a child dies before they become accountable, they will go to Heaven because of God’s mercy. On the other hand, if that child grows up and rejects Jesus as their Saviour, they are doomed to the everlasting fires of Hell! King David’s baby who died is an example of God’s mercy on a baby. The baby went to Paradise where David later went.

2 Chronicles 21:12-16 “And there came a writing to him from Elijah the prophet, saying, Thus saith the LORD God of David thy father, Because thou hast not walked in the ways of Jehoshaphat thy father, nor in the ways of Asa king of Judah, But hast walked in the way of the kings of Israel, and hast made Judah and the inhabitants of Jerusalem to go a whoring, like to the whoredoms of the house of Ahab, and also hast slain thy brethren of thy father’s house, which were better than thyself: Behold, with a great plague will the LORD smite thy people, and thy children, and thy wives, and all thy goods: And thou shalt have great sickness by disease of thy bowels, until thy bowels fall out by reason of the sickness day by day. Moreover the LORD stirred up against Jehoram the spirit of the Philistines, and of the Arabians, that were near the Ethiopians:”

God often sends people or circumstances to warn us about the consequences of our sins. In the case of King Jehoram, God sent Elijah. Jehoram was reminded of David, who was a man after God’s own heart. He was also reminded that he had godly role models to follow. Jehoshaphat, his father, and Asa, the king of Juda, were not perfect, but they were guidance enough to influence Jehoram to obey God. But, King Jehoram chose to practice sin against God and men.

The Sins of Jehoram

King Jehoram walked in the sinful ways of many of the kings of Israel. He allowed and encouraged the people of Judah and Jerusalem to worship false gods. Jehoram was also reminded of how he murdered his own godly brothers.

People Plagued Because of Sin

A deadly bowel disease struck Jehoram because of his rebellious sins. His life ended with his bowels falling out. Adding to their misery, the Philistine and Arabian enemies of Israel were sent by God to bring destruction and death to the subjects of King Jehoram.

Isaiah 38:1-5 “In those days was Hezekiah sick unto death. And Isaiah the prophet the son of Amoz came unto him, and said unto him, Thus saith the LORD, Set thine house in order: for thou shalt die, and not live. Then Hezekiah turned his face toward the wall, and prayed unto the LORD, And said, Remember now, O LORD, I beseech thee, how I have walked before thee in truth and with a perfect heart, and have done that which is good in thy sight. And Hezekiah wept sore. Then came the word of the LORD to Isaiah, saying, Go, and say to Hezekiah, Thus saith the LORD, the God of David thy father, I have heard thy prayer, I have seen thy tears: behold, I will add unto thy days fifteen years.”

King Hezekiah was so sick that he was very near death. God sent the prophet Isaiah to tell Hezekiah to set his house in order because he was about to die. In earnest prayer, Hezekiah told God that he faithfully served Him throughout his life. He pleaded for his life. Hezekiah understood that God is the Great Physician who has the power of life and death. Of course, we know that this was a test for Hezekiah. God knew that Hezekiah would express his faith in the power of God to prolong his life. Hezekiah was reminded that he was a descendent of King David who God loved. God heard the prayers and saw the tears of Hezekiah. The Great Physician added fifteen years to the life of Hezekiah.

The Cure for Sins

If we are sick or get a disease, God should be the first one we petition for healing. It is important to examine our life to see if some sin in our life may be the cause of illness. Use the magnifying glass of God’s Word to examine your life for the corruption of sins.

Sometimes a disease is in our life to test us. Our godly response when we have a disease can be a good influence on others around us. Every person who has a disease is not because of the result of their sins. But, you can be sure that there is always a purpose for the disease that anyone has!

Souls are under the curse of sin. Each individual must repent and believe on Jesus as their Saviour to have their sinful soul healed! The sick, unhealthy body of all saints will be healed in Heaven. But, the sinful soul of a dead, lost sinner will never be healed!

Karlsruhe scientists transfer 700 DVDs of data in one second

Rainbows Are Signs Of God’s Promise