Christian Mom To Hang For Blasphemy

“An appeals court in Lahore Pakistan has upheld the death sentence for a Christian woman, Asia Bibi, who was convicted of “blasphemy” (speaking against the prophet Muhammad) in 2010.

Asia Bibi was found guilty of making derogatory comments about the Prophet Muhammad during an argument with a Muslim woman.

The Lahore High Court rejected her appeal against the sentence passed by a lower court. Her lawyers have vowed to take the case to the Supreme Court.

Two prominent politicians – Punjab governor Salman Taseer and minorities minister Shahbaz Bhatti – were both murdered the following year for calling for reforms to blasphemy laws in the wake of her trial.

Ms Bibi consistently denied the allegations against her, saying they stemmed from an argument with a group of women over a pot of water.

Because she is a Christian, Asia Bibi will hang, the method of execution in Pakistan, over a cup of water. It’s that outrageous.
BBC News, which broke and covered much of the plight of Meriam Ibrahim, a Christian woman who was recently released from a death sentence in Sudan, has the disturbing details about what spawned this abhorrent conviction:

Asia Bibi’s troubles began in June 2009 in her village, Ittan Wali, a patchwork of lush fields and dusty streets.

Hers was the only Christian household.

She was picking berries alongside local Muslim women, when [an argument] developed over sharing water.

Days later, the women claimed she had insulted the Prophet Muhammad. Soon, Asia Bibi was being pursued by a mob.

“In the village they tried to put a noose around my neck, so that they could kill me,” she said in a brief appearance outside her jail cell.

Asia Bibi is a loving wife and the mother of five children. She is reportedly the “first woman sentenced to hang” in Pakistan under its Shariah blasphemy laws.

She was singled out, targeted, and falsely accused of a crime she didn’t commit because she is a Christian. This cannot stand.

Not only has she been sentenced to death, but she has a price on her head issued by a radical Muslim cleric encouraging the Taliban to carry out her execution.

Her husband and family have suffered for the past two years, fearing for their safety, but with the hope that her conviction may be overturned. Now that decision rests in Pakistan’s Supreme Court.

At the ACLJ, we’ve been fighting through our international affiliate the European Centre for Law and Justice (ECLJ) and its partner in Pakistan against these despicable blasphemy laws for years. We’ve successfully had a number of these outrageous charges thrown out of court.

This vile attack on a Christian wife and mother cannot stand. Like the case of Meriam, who is now a free woman because the world spoke out with one voice, it’s time for the international community to condemn Pakistan’s barbaric violation of Asia Bibi’s human rights.

She’s done nothing wrong, and these trumped up charges are merely because she is a Christian. Bibi must be free. She must not be executed for her faith.

Save Asia Bibi from Execution
Read the full text of the petition
PERSECUTED CHURCH 186,354 Signatures”

Please click on the web address above and add your signature to a petition to help save the life of Asia Bibi’s! I suggest that you do not donate to this site since I cannot guarantee that your money will be properly used. Also, it is not wise to give your home address. A good place to donate too is Hopeofisrael.net If we do not take a stand against this injustice, they will be hanging Christians in America next! 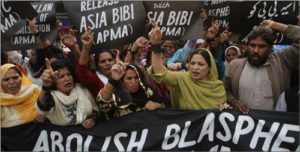 If Muhammad is a true prophet, let him defend himself. It is time to abolish blasphemy laws aimed at protecting this dead, false prophet. Picture from http://aclj.org/

NYC Ramps Up Surveillance of Citizens