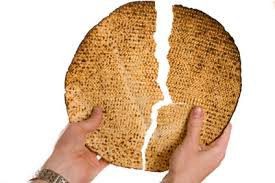 It is Pesach (Passover) again. The Seder (Passover Table) is set, as for 1900 years it has been set. Elijah’s cup, untouched and undrunk, stands in its place, a mute but eloquent reminder that some day He will come Who is theHope of Israel and the Desire of the Nations- our long-looked for Messiah. There, too, is the miserably dried-up bone taken from the shank of a lamb, a melancholy reminder that now in the sad years of our Golus (captivity) we have no Temple, no Priest, no sacrifice, no way of approach to a just and holy God, exactly as God had warned us would be the case if we disobeyed Him. See Hosea 3:4-5.

Little Moishe has now propounded the historic Ma Nishfana Kashes, (the questions asked by the boy annually at the Passover ritual. See Deut. 6:20.) and the father has fold him in solemn intonations:

“We were Pharaoh’s bondman in Egypt, and the Lord brought us out of Egypt with a mighty hand: And the Lord shewed signs and wonders, great and sore. upon Egypt, upon Pharaoh, and upon all his household before our eyes: and he brought us out from thence, that he might bring us in, to give us the which he sware unto our fathers. And the Lord commanded us to do all these statutes, to fear the Lord our God, for our good always, that he might preserve us alive. as it is at this day.” Deut. 6:21-24.

But we almost forgot one of the most important chapters of this moving narrative- indeed the one about which we started out to write. It is none other than the mysterious ritual of the Matzos!

Every Jew knows a remarkable and unique custom has come down into the Passover ritual through the hundreds of years, and no one has yet been able to explain how and where and why this custom originated. If has to do with the ritual of the three Matzos. Perhaps we can put it before you a little more intimately and vividly if we quote here from the personal narrative of the former rabbi, Leopold Cohn, now with the Lord. He tells how this very ritual or celebration was a powerful means in helping him to understand the Messianic significance of the custom. He writes in his autobiography that he was endeavoring to win his wife also to faith in the Lord Jesus Christ, our Messiah, and tells how the ritual of these Matzos, proved effective:

“Another help to her was that of a thought the Lord gave me at the time when for her sake I observed the ceremony on the first Passover night after she reached Scotland. Among other sacred rites performed on the first night of the Passover feast are the following ones: Three cakes of unleavened broad are placed on the table, one above the other, with a napkin between them so that each is separate from the other. The head of the family who is performing the ceremonies takes the middle cake and breaks it in halves, concealing one-half under the pillow of the lounge on which he reclines at that meal. Reclining is a symbol of the freedom the Jews gained at the time when God brought them out from the bondage of Egypt. At certain intervals. four cups of wine are served to those seated at the table and at the third cup, the father takes out the half cake from between the pillows, and divides it among the family. I used to perform that ceremony year after year without considering the real reason for doing so, but with the light of the teaching of the Lord Jesus Christ in my mind and heart, it suddenly dawned upon me what it all meant. The three cakes represent Father, Son and Holy Ghost-, the middle one, the Son, broken in halves, indicates the body of the Son of God, broken for our sins. Concealing it under the pillows signifies the burial of the broken body, and bringing it forth again at the third cup of wine indicates strikingly the resurrection of the Lord Jesus Christ on the third day.
“When the Lord gave me that thought, I at once with great joy in my heart, explained it to my dear wife and children. showing them that this custom which is being performed by all the Jews over the world from time immemorial, has in it the memory of death and resurrection of the Lord Jesus, and at the same time conveys to us His teaching of a triune God. The early disciples of the Lord Jesus were Jews and they must have instituted this ceremony among their people so that Christ should never be forgotten among them.”

And now, has it ever occurred to you, dear Jewish reader, how amazingly significant is this picture? And did you ever stop to question why and how it found its way into the Jewish ritual? Certainly it could never have gotten in by accident.

Now the synagogue in the first century of the Christian era was not so harsh and cruel in its attitude toward such Jews as had confessed their faith in the Lord Jesus Christ as is the modern “Temple.” Nowadays, we are grieved to say, the rabbis hate us who are the followers of the Lord Jesus Christ; they call us apostates, “Meshumodin,” and they breathe out all kinds of abuse against us. They accuse us of being traitors, when as a matter of fact we are the best friends that our Jewish people ever had. These rabbis will welcome into their “Temples” Jews that are unbelievers, agnostics, atheists, even communists, and give them places of honor, all this with the full knowledge that these particular Jews have denied the God of Abraham, Isaac, Jacob, and Moses.

But let a Christian Jew come info the “Temple,” a Christian Jew who loves his people, who believes the Word of God from beginning to end, who lays all his hopes upon the God of Abraham, Isaac and Jacob, who accepts in full faith the Lord Jesus Christ who came as a fulfillment of the promises made through the prophets. and the rabbi will turn on such a Christian Jew with a fury unbelievable. And this is the same rabbi who continually pleads for “tolerance” from others toward him!

Now, while the other Jews celebrated their Seder with the Passover Lamb according to the Law of Moses, these Hebrew Christians celebrated the same occasion with the Seder of the Bread and Wine, depicting in their ceremonial the suffering. death and resurrection of their Lord. Thus there were two kinds of Seder celebrations in Israel side by side, namely, the Jewish Seder with the Passover Lamb, and the Hebrew Christian Seder with its Bread and Wine.

With the destruction of Jerusalem and the Temple in A. D. 70, the Jewish Seder ceased. and the only Seder which survived within the Jewish nation was that of the Hebrew Christians, who continued to be an integral part of the Jewish community. Thereupon, this Seder, the chief elements of which were the Bread and Wine, became the nucleus of the Seder celebrations of all Israel, which by degrees adopted it and made it their own, unconscious of the real story it told, and the real message it conveyed.

And now the secret is out, and the puzzle is solved. Read these amazing words which fell from the lips of the Lord Jesus Christ Himself, on the very night when He gathered together in the Upper Room to take for the last time the Passover Supper with His disciples. He took up the Matzo and broke it, and gave pieces to the disciples and said to them, “Take, eat: this is MY BODY, which is broken for you: this do in remembrance of me.”

And so dear Jewish readers, every time you break the Matzo on the Passover Night and every time you drink the cup of wine, you are unconsciously celebrating the fact that the Lord Jesus Christ’s body was broken for you and for me, on the Cross of Calvary 1900 years ago.

Now the only question that remains, since you are celebrating it unconsciously, why not come out openly and recognize in your inmost soul that the entire Passover is a reminder year after year that God redeemed you through the precious blood of His only begotten Son, Jesus Christ? And if you will recognize this solemn fact and will appropriate it to yourself and say with a childlike faith, “Lord, I do believe,” then you will experience such a joy as you have never known before, and you will have the happiest Passover of all your life!

Copyright © 1997- 2017 – HIBM All editorial comments, opinions, articles, video, and audio authored or written by Hope of Israel Baptist Mission, Inc. (HIBM) or by any of its affiliated/associated staff is copyrighted by HIBM, all rights reserved worldwide. The information on this site cannot be stored on BBS or Internet sites or otherwise used without written permission from HIBM. Articles may not be sold or placed by themselves or with other material in any electronic format for sale, but may be distributed free by e-mail or print media. They must be left intact and nothing removed or changed, including informational headers or footers. Any non-HIBM articles, videos, audio, etc. included in these postings or within this website (www.hopeofisrael.net) are copyrighted by their respective authors and permission must be granted accordingly by them. HIBM will not be responsible for any copyright infringements or misuse by others. HIBM does its best to reference all materials contained herein wherever possible, and otherwise abides by the Fair Use Act (17 USC 107 et seq.); however, in the unlikely case that credits are missing or information is inaccurate, we ask to be immediately notified of any needed corrections. Disclaimer: All opinions contained herein are not intended to offend or misrepresent any person or organization. Their purpose is to educate and tell readers about proper Biblical teachings about the issues of today, including factual supportive statements or Biblically-based rebuttals to contrary or false teachings, whether they be about the Bible, Israel, Christianity, Bible Doctrines and Customs, Prophecy, End-Times, and Biblical Moral Responsibilities. Use of embedded or excerpted articles, research, or quotes does not necessarily indicate endorsement of the author or organization. Standard disclaimers apply to all material on http://www.hopeofisrael.net. Email: webmaster@hopeofisrael.net. Hope Of Israel Baptist Mission, Inc., PO Box 1700 Powder Springs, GA 30127 USA

Messianic Prophecy According to the Rabbis